Abzû is gorgeous. Beautiful games are a dime a dozen in the landscape of contemporary video games, but a truly gorgeous game? That is a much rarer thing. While games like Uncharted 4: A Thief’s End provide an array of moments with jaw-dropping vistas and breathtaking cinematic shots, Abzû offers up a constant stream of sheer eye candy. It is no small feat then when I say that the game’s original score manages not only to match the brilliance of the aesthetic presentation but at times even surpasses it as the most impressive aspect of Abzû.

Throughout my two and a half hours with the game I encountered eye-poppingly colorful underwater environments, seemingly endless expanses, and claustrophobia inducing tight spaces. The linear game does a wonderful job of letting you explore and appreciate each environment while always making your objective clear so that you can continue to see what visual treats wait for you in the next locale. Abzû even makes these transitional moments from one area to the next exciting as jumping into a current whisks the player away on a rush of momentum that has you dashing through groups of fish and compelling them along with you in a series of truly thrilling moments. These set pieces can be so mesmerizing and include so many other underwater creatures that I found myself on more than one occasion losing myself on the screen because I was trying to take in the majestic environments I was rushing through.

Similar to many games of this generation, Abzû has no points, no leaderboard, no fail state. You do not “beat” Abzû as much as you finish it. As is the case with games of this ilk, the satisfaction comes not from the eventual conclusion but from the journey itself, and while Abzû does offer up a satisfying ending it never quite hits the level of resonance that you can tell developer Giant Squid was hoping for. As a whole, Abzû is greater than the sum of its parts.

From a gameplay perspective Abzû is a hit and a miss. When it is working properly, the feel of the swimming is easy and intuitive, allowing you to manipulate the camera and appreciate the environments while moving through them. However, at times—particularly in close spaces—the camera acts a bit wonky and my controls seemingly flipped directions making me move my character in an unexpected manner. While this alone is a mild annoyance, the error appears to be even more egregious for a game which nails nearly every aspect of presentation. No matter how stunning a game looks and sounds, nothing takes you out of the experience quite like a moment of clunky controls.

As much as a game should be evaluated on its own merits, art does not exist in a vacuum and it is necessary to acknowledge the elephant in the room. Is Abzû just underwater Journey? The answer to that is both yes and no. While Journey was primarily an isolating experience in a barren landscape, Abzû is teeming with life. Nearly everywhere you go, you are met with new and varied forms of underwater fauna which gives the game a sense of life and excitement that Journey never had. These underwater animals are not only for show as you possess the ability to grab onto them and go along for a ride. Grabbing onto a dolphin and leaping out of the water to catch a brief glimpse of the horizon surrounded by a group of other leaping dolphins is a truly memorable moment. Likewise, swimming through a school of thousands of fish is both overwhelming and visually arresting.

Both games are entirely wordless and see an unnamed protagonist wander through gorgeously rendered, but vastly different, environments and rely heavily almost entirely on environmental storytelling. Certain gameplay mechanics are eerily similar as well as the aforementioned current sequences mirror Journey’s downhill sand surfing set pieces. Throughout each game you’ll discover remnant of a civilization long gone and have to come up with a meaning for everything yourself. Perhaps the greatest similarity between the two games, and Abzû biggest problem, is that the game seems to try and mirror Journey thematically at every moment but ultimately falls short of the same emotional resonance that Journey had. Abzû takes you on the same rollercoaster of a ride that Journey did but it feels like a rollercoaster for kids. The highs are never quite as thrilling and the lows are never quite as disheartening. While it is almost irresistibly tempting to refer to Abzû as “a watered down Journey” that isn’t quite accurate. It is more of a muted version of ThatGameCompany’s masterpiece. Had Abzû been released before Journey then the comparison would undoubtedly be more kind and forgiving but for two games whose DNA is so similar shortcomings tend to standout. 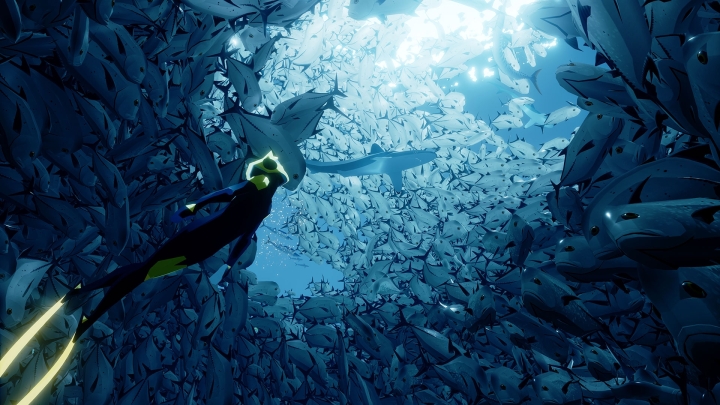 The game can easily be completed in a single sitting but Abzû is the type of game that reveals more and more of itself to you through multiple playthroughs. Much like Journey, there is no concrete narrative or detailed plot, it is up to the player to derive meaning themselves and the more one plays Abzû the more meaning will be gleaned from it. If you require more tangible rewards for incentive then the hidden collectables and secrets provide incentive for another dive into Abzû once you’ve completed it.

Closing Comments: I greatly enjoyed my time with Abzû. It is an amuse-bouche of a game. A single serving platte cleanser that made me marvel and think. While it is does have its flaws it serves as a testament to what the medium of video games is capable of and certainly merits experiencing.