December 2nd, 2015 was a terrible day. It was the day that 14 innocent lives were taken during a terrorist attack in San Bernardino, California. As an Arab-American Muslim I had the same reaction that any American would have. I felt true sadness and a sense of helplessness. I also remember receiving a Facebook message from a friend of mine and freelancer for the LA Times. She told me that a coworker of hers was writing a piece meant gauge the reaction from the LA Muslim community and wanted to interview me. I made myself available and spoke on the phone with the reporter for about 30 minutes. I spoke about how I knew this would only add fuel to the fire for all the ignorant bigoted people in this country and that I truly felt bad for Muslim children in this country who have to live in a 24/7 bullying cycle today. Yet the standout quote from the article came from the Director of the LA chapter of the Council on American-Islamic Relations, Hussar Ayloush, when he said, “In a perfect world, no community would ever have to comment on or condemn an act just because the perpetrator looks or sounds like or share a skin color or faith with the rest of the community. That’s not the world we live in today.”

And it’s not the world of Deus Ex: Mankind Divided either. If there is one thing that I will forever love about Mankind Divided it is the way it forces players to step into the shoes of someone who is ostracized from society and hated for circumstances beyond his control, hated for just being who he is. The “incident” that occurred at the end of Human Revolution has left the world of Deus Ex in a constant state of tension and as terrorist attacks continue to plague the world, Augmented civilians become subjugated by an oppressive government, a corrupt police force, and numerous political organizations. “Augs,” as they are often referred to, are forced into ghettos, taken advantage of, or just plain shot in the street. Even Jensen, who is able to operate with (somewhat) free reign as an Interpol agent is forced to go through checkpoint after checkpoint where he is greeted by a police officer who demands Jensen’s “papers” and always has a derogatory slur to throw into the conversation.

Deus Ex’s futuristic adaptation of Prague, the game’s central hub space, is equal parts beautiful and terrifying. It evokes thoughts of a militarized police state of pre-war Germany while serving as a constant reminder of the deep seeded prejudices in this world and the fact that social inequality is still very much present.

From a gameplay perspective, Mankind Divided fixes many of the issues of Human Revolution. The clunky control scheme of the previous game can now be replaced by multiple schemes, one of which is on par with any modern day FPS. While the shooting mechanics are not up to the same standards as any of the titans of the genre, they are not meant to be. While you can certainly brute force your way through the entirety of Mankind Divided, it is clear the this time around Eidos Montreal wanted players to be able to tackle any objective in multiple ways. You are encouraged to play stealthily and sneak around enemies, hack computers, and explore nook and cranny. The entire game can be played without killing a single soul. The terrible boss battles from Human Revolution are gone, in fact, it is possible to play through all of Mankind Divided without “fighting” a single boss. The shear number of ways and variety in which you are able to complete your missions is truly a testament to the wonderful level design by the Eidos Montreal team.

No Deus Ex game would be complete without a deeply upgradeable skill tree and I am happy to report that Mankind Divided boasts a deep and varied upgrade system. Doing almost anything from hacking a computer to killing an enemy grants players XP, earn enough XP and you’ll unlock a Praxis point which can be spent on upgrading your augmentations. The upgrade system is deep enough that even a few hours into my New Game+ I’m still unlocking/upgrading useful skills but what makes Mankind Divided’s skill tree so good is the shear number of useful augmentations you can have. I was constantly tempted with multiple enticing augmentations every time I leveled up and no matter what decision I made I never found myself regretting it as nearly every option opens new doors for the player (literally and metaphorically). Do you unlock an augmentation that allows you to read a person’s emotions and aid you in conversation? Do you upgrade your hacking ability to gain easy entrance into new buildings? Or do you just focus on health and armor and become a one man wrecking crew? All these options and more are available and each offers up its own rewarding play style while not alienating you from experimenting with other styles. My only complaint about the skill tree is the so-called “experimental augs,” these are supposed to feel high powered but I often found myself only using a select few as many of them served the same function as my various guns. They seemed to be in the game more because they make you look and feel cool rather than actually impacting gameplay in a significant way. 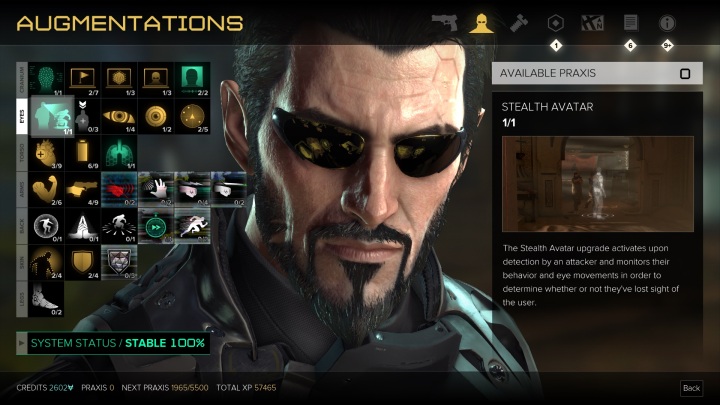 Mankind Divided is not an open-world game but it does have many “open” elements to it. The main hub world of Prague allows for free exploration, although after a few hours running around the streets and seeing the same landmarks again and again it started to feel a bit confining. Certain primary missions will take Jensen away to different locations like the aforementioned Aug ghetto and provide a nice change of scenery. The possibility to discover dozens of side quests, many of which are more interesting than some of the story critical missions is one of my favorite parts of Mankind Divided. One particular side quest had me investigating the ritual murder of an augmented woman, while another had me working for a guerrilla news outlet. The wonderful thing about these side quests is just how organic they feel, they come to your attention from a hacked terminal, an overheard conversation, or a bribe to the right drug dealer. While the main story will take around 10-12 hours to complete, side missions can more than double that time and really add an extra layer of depth to the world and its characters.

Similar to Human Revolution in 2011, Mankind Divided is not a graphical powerhouse, some character models can be a bit rough but it never really distracted me from the conversation. In contrast, some of the environments are beautifully rendered and truly convey a particular tone. Prague oozes with history and futuristic tech and evolves from a tension filled urban city to a full-blown police state. The Aug ghetto illustrates the depths to which these people have been forced to live while the massive corporate offices highlight the disparity between the “naturals” and “augs.”

My biggest problem with Mankind Divided is its story. I am a smart man, I know I am a smart man, that being said, I had a lot of trouble following the story early on. While I appreciate and love a mature and complex story, like the one Deus Ex is trying to tell, the problem comes in the execution of the storytelling. There are multiple groups, some public, some working behind the scenes that are all vying for control and regulation of the augmented population and the world at large. The problem is that it seems like every group has a different acronym that can be hard to remember at first and likewise, they are referenced so quickly and without any sort of visual association or method to remember who they are that they can quickly be forgotten. Similarly, many story critical people are mentioned without ever being seen so that a few hours later when they are mentioned again I was often left wondering, “wait who is he again?” In a time when we often condemn video game stories for holding our hands too much I supposed Mankind Divided’s storytelling problems aren’t terrible but the result is certainly obtuse. There is a middle ground between hand holding and straight up confusion and unfortunately Deus Ex veers more towards the latter.

Early on I was not quite sure how to feel about Deus Ex: Mankind Divided. When I set my controller down and stepped away from the game I rarely thought about it, but when I would dive back into the game I found myself not wanting to stop. There is always something to do, an email to read, a side quest to investigate, or an upgrade to unlock. As the story progressed and began to reveal itself to me I became more excited to jump back into the role of Adam Jensen. Now, after completing the game I am about halfway through New Game+ and I think it is fair to say that Mankind Divided clearly got its hooks in me.