This is the beginning of a new series called ArchiGame. In this series I’m going to be taking an in-depth look at one building and one game that I believe have something in common.

I’ll never forget the way the MAXXI Museum looked the first time I saw it, after a twelve hour day wandering around Rome sketching classical buildings and Baroque facades here we were, outside of the city center gazing upon a building 400 years newer than anything we had seen that day. Juxtaposed against the Baroque architecture that populates much of Rome, the MAXXI appeared to be almost an anachronism within the “Eternal City.”

Walking into Zaha Hadid’s contemporary museum felt like stepping into the future. The exposed concrete exterior, the white walls, the custom made reception desk, the curved lines that flowed throughout the entire entrance to form the staircases all made the MAXXI feel like a sculpture just as much as a building meant to house them. One has the sense that they’ve just walked into a sterile environment, like a hospital of the future. As we moved through the museum I noticed that this building was a far cry from a traditional museum. Do you remember the first time you saw a loft apartment? Traditional apartments are a series of closed off rooms and hallways where spaces are segregated. Lofts bare their space for all to see. The MAXXI is a loft of a museums. Traditional notions of galleries are gone and instead one moves from space to space without the need for a definitive transition.

The MAXXI Museum is a sensory feast. I found myself constantly enamored with the building to the point that I had trouble deciphering it from the art itself. There is very little I don’t remember about my experience with the architecture itself, the artwork displayed? Not so much. In fact, were it not for a few pictures I snapped before a security guard informed me that photography was prohibited I would not be able to recall a single work of art in the museum. The building imprinted itself onto me in a manner in which its program no longer mattered. Some buildings are so masterfully crafted and beautifully designed that one forgets their purpose entirely. With the MAXXI, I found that it didn’t matter. It wasn’t about the art or about the architecture. The two began to work in harmony.

If you couldn’t tell already, I’m a really big Bioshock fan. I placed the game into my first ever video game Hall of Fame and even the ArchiGamer logo was heavily inspired by Bioshock. The game is brilliant for many reason, the first and most significant of which is its setting, the underwater city of Rapture.

Just like the MAXXI, I will never forget the first time I saw Rapture. Moving through the underwater pod as Andrew Ryan explains his vision of Rapture is one of the single greatest moments in video game history. The games hides the city from you until the perfect moment, when Ryan’s tirade about governments and religion reaches its climax. As a viewer, the experience is both arresting and awe-inspiring. Similar to walking through the MAXXI, it needs to be seen to be understood. The game nails everything from atmosphere, to tone, to the art deco style that would almost have you believe you’re looking at an underwater version of Peter Jackson’s 1920’s New York in King Kong. Rapture, more so than the playable protagonist, is the true star of the game. 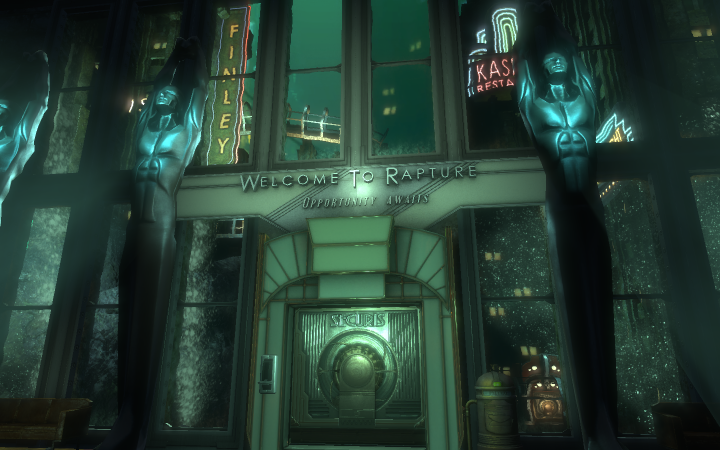 You would be hard pressed to find a list of greatest game worlds that didn’t include Bioshock’s Rapture, the sunken city is the true star of the show. I never owned an Xbox 360 (BioShock was initially an Xbox 360 exclusive) so it wasn’t until 2009 that I was able to play Bioshock on my college roommates 360. It’s been six years since I’ve completed the game and hands down the thing that sticks with me the most is the games atmosphere. If it weren’t for the fact that Bioshock tells one of, if not, the best stories in video games then the world of Rapture would have been the only thing that stuck with me six years later. The reason that Bioshock boasts one of the most genius stories in gaming is largely because of Rapture. Simply exploring the sunken city paints a vivid image of what life was like in the dream of a utopia that existed before society crumbled. Traditional game mechanics and the ways in which we move through game space are incorporated into the story in a way that only an interactive medium like a video game could tell.

We often think of buildings as a housing for their intended function, similarly we think of video games of being a sum of gameplay, setting, and story. What the MAXXI and Bioshock both take function, gameplay, and story and seamlessly blend them with their built environments so that the setting not only compliments the actions taking place in it but is essential to the experience. Don’t get it twisted though, the architecture of the MAXXI and Rapture are still very much the stars of the show. Do a google search of the MAXXI and you’ll find hundreds of images devoid of any art, google Bioshock and it is Rapture that dominates. The MAXXI would not be the same museum without Zaha’s designs and Bioshock would certainly not be the masterpiece it is without Rapture.